The Suboxone® Sublingual Film has been available in most pharmacies since September 2010 and so far, patient feedback has been mostly positive. The majority of patients previously on the Suboxone sublingual tablets have been willing to convert to the Suboxone Film because the manufacturer wisely offers a $75 coupon! This coupon can be used twice the first month and monthly thereafter until March 31, 2011. The tablets and the film strips are priced the same. Patients can obtain the Suboxone Film Savings Card by going to www.suboxone.com and following the “Get Savings Now” link. 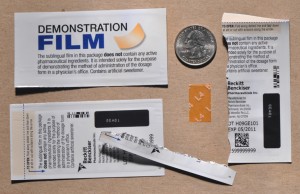 Patients report that the film strips dissolve faster and don’t leave the chalky residue the tablets do. The taste is a lemon-lime flavor, but it doesn’t last as long making it preferable overall. The strips are individually wrapped in pouches that are convenient to carry but difficult to open. Each pouch has a product ID number and these numbers are consecutively numbered in the box so  it’stechnically possible for a physician to monitor usage more closely. So far, I haven’t been this picky regarding strip counts, but the DEA may eventually insist on it to address the rising Suboxone diversion problem.


Patients also seem to perceive a difference in dosage strength with the Suboxone Film when compared to the Suboxone tablets. Neither form of the medication is designed to be swallowed because the active drug is poorly absorbed from the stomach (less than 5% gets into the bloodstream). Sublingual absorption of the medicine gets about 40% into the bloodstream. Since the strips dissolve quicker sublingually and absorb faster than the tablets, they are a better delivery system.  So patients using the film strips as designed are getting more of the medication.

Interestingly, other patients report something entirely contradictory – that the dose effect of the strip doesn’t last as long. My theory is that these patients aren’t keeping the dissolved medication in their mouths long enough. Since the strip dissolves quicker, they don’t wait long enough before swallowing to get the full effect. Therefore, they want to take another dose.

However, a pharmacokinetic comparison shows a 20% higher plasma concentration in the first 2 hours after administration of the Suboxone Film vs. Suboxone tablets due to improved bio-availability (absorption). For this reason some patients develop dizziness, nausea and fatigue related to taking more medicine than they need. These side-effects will resolve by lowering the dose. My suggestion would be to take advantage of the differences in absorption rates and lower the daily maintenance requirement. Patients who do so should notify their physicians.

In addition to not swallowing the film dose too quickly, it’s also important not to eat or drink for at least ten minutes after placing the strip under the tongue. I’d go one step further and recommend not swallowing the accumulated spit which contains the dissolved medicine during this time.

Although it is probably true that Reckitt-Benckiser Pharmaceuticals, the company that is marketing the Suboxone Sublingual strips, has launched this product because Suboxone tablets may soon be available in a generic, I am still impressed by this advancement in the delivery system.